Our Color guard is an important part of our troop life— below are our Flag Ceremonies for posting and retiring the colors at a troop meeting or other gathering.

Honoring our flag is an essential ceremony at Trail Life USA gatherings: it shows respect for our great nation and for the men and women who have sacrificed their lives to preserve our liberty.

“Flags are almost as old as civilization itself. Imperial Egypt as well as the armies of Babylon, Chaldea, and Assyria followed the colors of their kings. The Old Testament frequently mentions banners and standards. Many flags of different designs were present in parts of the American colonies before the Revolution. When the struggle for independence united the colonies, the colonists wanted a single flag to represent the new nation. The first flag borne by the Army as a representative of the 13 colonies was the Grand Union flag. It was raised over the Continental Army at Cambridge, Massachusetts, on 2 January 1776. That flag had the familiar 13 stripes (red and white) of the present flag, but the blue square contained the Crosses of St. George and St. Andrew from the British flag.

The Stars and Stripes was born on 14 June 1777. On that date, Congress resolved that the flag of the United States be 13 stripes, alternate red and white, and that the union be 13 stars, white in a blue field, representing a new constellation.”[1]

The Color and Colors

A flag ceremony may be done in any manner, as long as it is done in good taste and follows proper Colors etiquette. It may include as many Trailmen as needed. 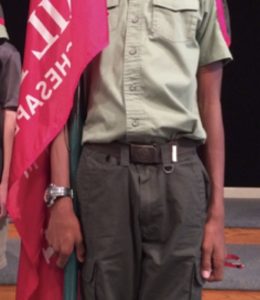 When to greet the National Color (by salute or hand over heart):

FLAG BEARER:The person who carries the Colors, one flag per person. Carry the Colors on the right side in right hand, keeping the staff vertical and the flag aloft and flying free. Never dip the National Color for anything or anyone.

COLOR GUARD:They guard the honor of the Colors and watch to see that the Colors do not touch the ground. They stand behind the flag bearer. One per flag is traditional.

CALLER: The caller is the designated Trailman who “calls out” the parts of the ceremony. The caller stands in front of the audience and troop.  (For combined Trail Life USA and AHG ceremonies, either an American Heritage Girl or Trailman may serve as the primary caller with the assistant being from the other organization.  They may stand together and call out their respective Oaths and Creed.) 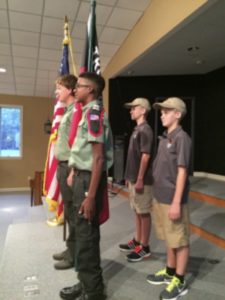 “Audience, please rise. Those not in uniform, please place your right hand over your heart.  Please remove your hats.”

“Color Guard, Forward, MARCH.”(Wait until the Colors guard reaches the front position before giving the next command.)

“Prepare to post the Colors!”(The flag bearers hover the flagpoles over the hole in the flag stands and waits for the command to post the colors.)

“POST THE COLORS.”(Both (or all) flags should be placed in the stands at the same time.  There should be one thump.  Immediately, the flag bearers grasp the flags with both hands and pulls flag out to both sides of the pole to display the flag for a silent count of about three seconds and then the flag bearers come back to the position of attention.)

“Please recite the Pledge of Allegiance.”

“Please join us in reciting the Trail Life USA Oath.”

“Color Guard, REFORM.”(The Colors bearers step out and the Color guards follow them as they march back to the front position.)

“Audience, please rise for the retiring of the Colors.”

“Color Guard, Forward, MARCH.”(Wait until the Colors guard reaches the front position before giving the next command.)

“Color Guard, Prepare to Retire the Colors.”(Flag bearers take hold of their flags with their hand in correct position for carrying the flags, and waits for the next command.)

“RETIRE THE COLORS.”(Both (or all) flags should be pulled out of the flag stands and brought up immediately, in a smooth motion, to the carry position.)

“Those not in uniform, please place your right hand over your heart. Please remove your hats.”

“Color Guard, REFORM.”(Flag bearers should always turn to their left when turning around in order for the U.S. Flag to always be on its own right. Wait for Color guard to return to formation at the front position.)

“Color Guard, Forward, MARCH.”(Flag bearers step out and the Color guards follows behind as they march to the rear of the audience.)

“Please bow your heads and join in prayer….”

“Color Guard, DISMISSED.”(No Commands are given, but the flags should immediately be secured and placed back in storage, whether they are rolled on the poles or removed from the poles and folded.)

“Audience, thank you for joining us.”