How to Safely Cross a River

When you are really out in the wilderness, it's likely that you'll need to ford a river or stream where you need to walk across it to get to the other side. Depending on the temperature and water levels, fording rivers and stream on backpacking trips can be quite dangerous. But there are some basic precautions you can take to mitigate your risk and developing skills at reading water and understanding the factors that cause it to flow the way it does can greatly increase your safety margin.

Fording a river is not the same as swimming it. If the depth of the water is above your thighs during a crossing, turn around, and find a better place to cross. There's stories of AT thru-hikers who have forded streams that came up to their chest. Don't even think of doing this. The more body mass you have in the current, the less control you have, so make sure the water does not come over your thighs if possible and certainly not over your waist.

The first thing you should do when reaching the edge of a river or stream that must be forded is to scout for a good location to cross. Don't assume that the line blazed on the trail to the other bank is the path you should follow. The volume of water flowing downstream is not constant and the best crossing point can differ depending on weather conditions, temperature, or new hazards that were not present when the blazed crossing point was laid out. River conditions are very dynamic, so a good crossing point on one day may not be safe on another.

Before you cross a river or stream, you should always make sure to release the hip belt and sternum straps on your backpack so you can jettison it if you lose your footing and get washed downstream. Otherwise, your pack will fill with water and severely compromise your mobility. Water weighs 2 lbs per liter/quart, so if you have a 50 L pack, there's no way you'll be able to lift it while you're fighting for your footing. Let it go and save yourself first.

Imagine you are climbing a rocky mountain blindfolded and in the rain. That's essentially what you are doing when you cross a river bed. Underwater rocks are wet and slippery and you probably won't be able to see them. Some people carry sandals or crocs for river crossings. I don't believe that these provide enough traction or protection for your feet and recommend that you use your regular boots, trail shoes, or special purpose water shoes instead.

Always look for pieces of wood, trees, or branches in the water or overhanging the banks, which are called strainers. You never want to cross upstream from a strainer, because if you slip and get flushed up against it, the current will eventually push you under water and you can drown. Don't be fooled into thinking that shallow water is less risky than deeper water.

After checking for strainers, look at the current and how fast it is flowing. Avoid crossings at points where the banks of the stream are more narrow. The power of the current will be strongest here and could sweep you off your feet more easily. If there is an island in the middle of the a stream, this may be a good place to cross because it splits the power of the current into smaller substream that can be more manageable.

Now look at the side of the river closest to you and near the far bank. If there are rocks near the banks, they usually form an area of water called an eddy. If you look closely at the water in an eddy, you'll see something very counter-intuitive: the water in them flows slowly upstream. The same thing happens on the inside curve of a river. Again these can be safe havens during a crossing, out of the current.

Next look for rocks that are sticking out of the water. If you look closely at the surface of the water, you can see that the water flowing behind exposed rocks is moving more slowly than the water on either side of it. The current here is less powerful and these can be good places to rest during a crossing if the current is strong. The same is true for standing waves, but the rocks that form them are underwater. Don't cross in the whitewater part of the wave, but beyond it, and use caution because these features sometimes occur in deeper sections of the river.

Use Walking Poles or a Stick

When crossing a river, use your walking poles or a stick for extra balance to avoid falling over and as a probe to read the river bottom. Wider branches can even be used to break the current if you plant them firmly against the river bottom and stand behind them.

Cross as a Group

It you are hiking with another person, you can increase your safety level by crossing together in swift current with one person standing directly behind the other. In this scenario, the upstream person breaks the current, creating slower water behind them, and making it easier for the downstream person to help them remain upright. With four legs on the river bottom, there's less chance that two people will fall over and get washed downstream. With three people, you can form a triangle, which is even more stable. Crossing in groups like this should be practiced before trying it in a less controlled situation.

Crossing as a group - Link arms to back and lead with the most upstream member. 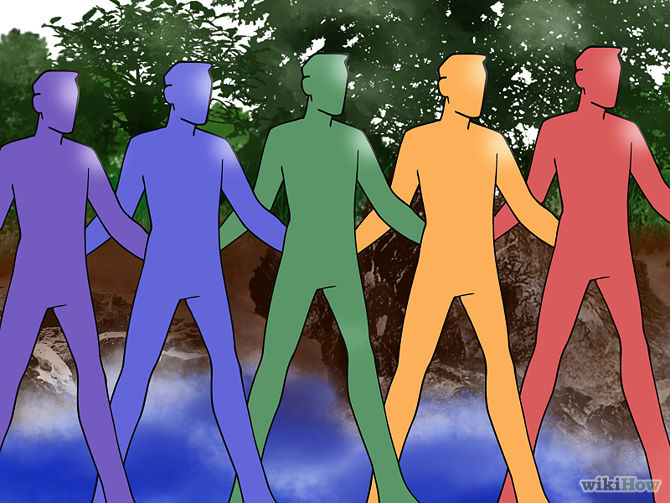 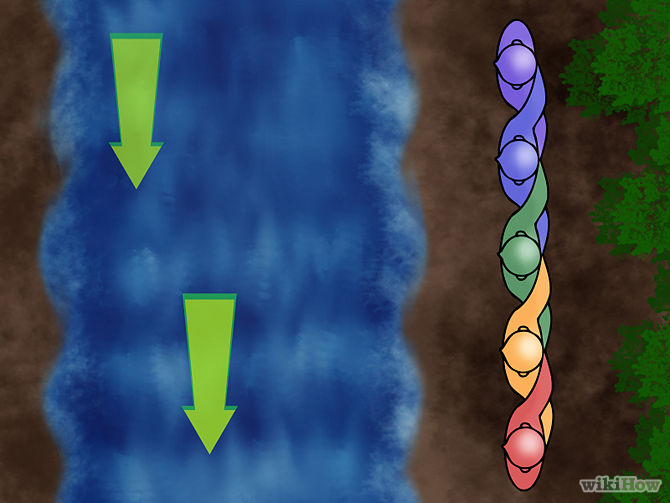 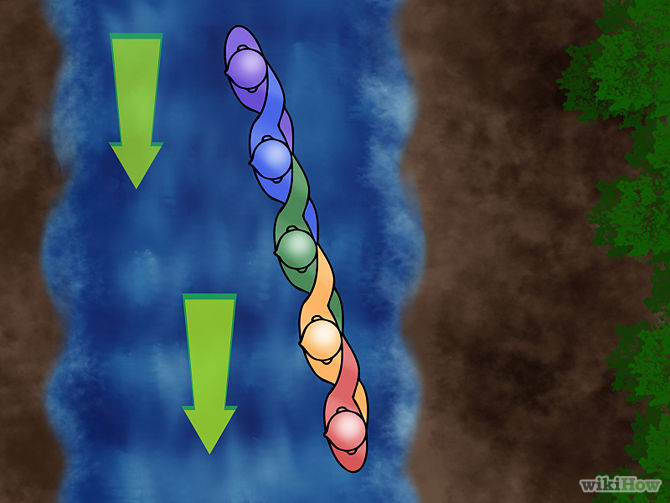 When grossing with a group of three, link arms to back in the shape of a triangle. 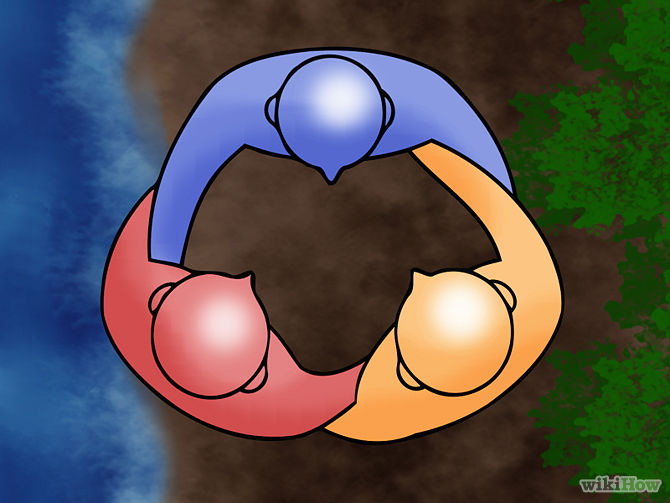