The Watch Method is one of the easier methods to use because it does not require anything except the watch on your hand.  The Watch Method is shown with an analog watch (the one with hands!).  It can, however, also be done with a digital watch, since you'll know the time.  You only need to visualize the arms of a watch or clock in your mind or draw them on the ground.

To find a north-south line with your watch: 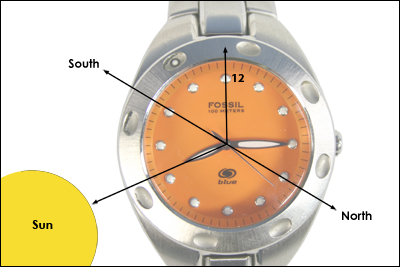 1. Point the hour hand towards the sun.

2. Find the center point of the angle between the hour hand and the 12 o’clock mark on the face of the watch.

3. The center angle is the north-south line.

For this approach, remember that when the sun casts shadows, those shadows are in the opposite direction as its position in the sky. That means when the sun is in the eastern sky, its shadows will point toward the west.  It is less accurate than the Directions by Day - Equal Length Shadow method and moreso the closer to the equator you are, however, it takes much longer and is generally accurate enough to get you oriented in a needed direction. 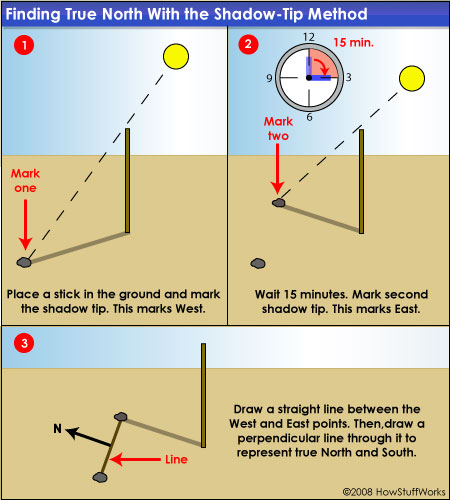 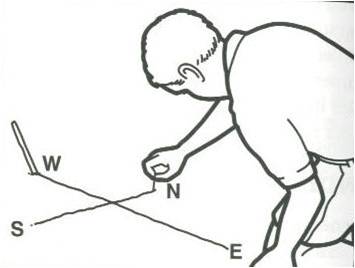 You'll need a sunny spot and level ground for this method. It is more accurate than the Directions by Day - Shadow Stick method, however, it takes much longer.

In the morning sometime before 10 am:

The shadow from the stick will start to shrink throughout the day close to noon and then begin to extend once again later in the afternoon. At some point in the afternoon the tip of the sticks shadow will intersect the arch you drew earlier.

It is also helpful to make a semi-permanent structure to depict your directions afterward if you are not departing right away so that a flash rain, snow, high winds, or any other of the elements do not disturb your findings. 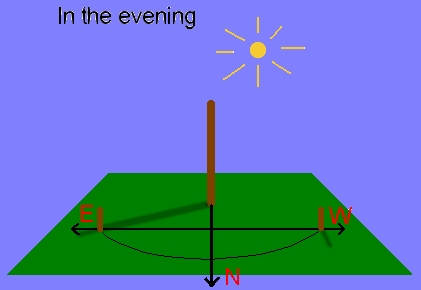